Tackling the housing crisis together

scroll down
The Archbishops’ Commission on Housing, Church and Community was launched in April 2019 with the ambitious remit of re-imagining housing policy and practice. This and future Commissions are independent of the Church of England’s institutions, with the freedom to say whatever they believe is necessary.

As well as making recommendations for Government and other key actors in the housing market, the Commission was tasked with looking at what actions the Church could take, on its own or in partnership with others, to help tackle the crisis at local, regional, and national level.

'Coming Home' is a report commissioned by the Archbishops of Canterbury and York in response to the housing crisis. It sets out vital actions for the Church, Government and other stakeholders with a focus on building better communities and homes, not just houses.

Download the Executive Summary of the 'Coming Home' report 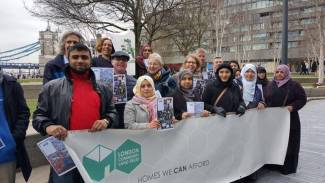 There is a long history of church involvement in housing across all Christian denominations: from almshouses in medieval times and the pioneering work of Christian social activists. This report picks up where others have gone before, examining how that tradition can be revitalised today and become a mainstream part of the Church of England’s mission.

Throughout the last 2 years, the Commission has sought to listen to people at the sharp end of the housing crisis and learn from dioceses and local churches with experience of tackling these issues. It is the hope of the Commission that this report might inspire us all to action in our own contexts and communities.

The report picks up where others have gone before, examining how that tradition can be revitalised today and become a mainstream part of the Church of England’s mission.

The housing crisis is multi-faceted and looks very different depending on who you are and where you live. The Commission heard from people with direct experience of housing problems and from church groups across the country about the issues affecting their local area and about what they are doing to help alleviate its impact on their community. While the housing crisis affects many of us, it does not affect us equally. Those who are already worse off are bearing the brunt.

"At the heart of this report is the idea that simply building more houses – whilst important – is not sufficient to address the prolonged housing issues this country continues to face. We need more truly affordable homes and stronger communities that people can be proud of and where they can feel safe and welcome, put down roots and flourish."

The Archbishops of Canterbury and York

What does the report do?
What are the 5 values?

We need to build, not just more houses, but stronger communities. Based in Christian thinking we have identified 5 core values that will set a new standard for what good housing should look like:

We are asking for people to share these far and wide.

Who are the Commissioners?

The 'Commission' is made up of ten Commissioners drawn from housing professionals, clergy, business, theology and local government.

Charlie Arbuthnot worked in investment banking in the City from 1978 until 2008. During this time, he opened up various new markets including the market for private finance for housing associations and advised Her Majesty’s Government on introducing private finance to the social housing sector. In 2008, he left to set up his own business and became a self-employed financial advisor to housing associations. This has allowed him to focus on a wider remit covering both financial advice to housing associations and strategic advice around building community and inter-connecting relevant stakeholders with a view to community transformation. Charlie also sat on the main board of The Housing Finance Corporation (2008-2018) and was the Chair of THFC's Credit Committee (2014-2018). His pro bono roles include work with the London Borough of Wandsworth on faith and community, hate crime and elderly outreach, mentoring various individuals and several small emerging businesses, and chairing his church’s strategy team.

Bishop Graham worked in insurance for a number of years before training for ordination at Wycliffe Hall, Oxford. He was curate at St Leonard’s Church in Exeter, before returning to Oxford to be Chaplain of Jesus College and a tutor at Wycliffe Hall. He completed a PhD on the Theology of the Cross in St Paul, Martin Luther and Blaise Pascal, and went on to teach Historical Theology full-time at Wycliffe, where he was also Vice-Principal for eight years. He also taught within the Theology Faculty of Oxford University. In 2005, he moved to London with his wife, Janet, to help launch St Paul’s Theological Centre, which in 2007 became part of the newly launched St Mellitus College. He was the College’s first Dean and oversaw the initial significant growth of the College over the following eight years, and he continues in a role as President of the College today. He became Bishop of Kensington in 2015 and was closely involved in the aftermath of the Grenfell Tower fire in 2017.

Chris is an Anglican clergyman and social entrepreneur with over four decades’ experience of working in community economic and social development, with a particular focus on issues of faith and economy. He pioneered the Government’s work with faith communities whilst on secondment from the Church of England’s General Synod to the Government’s cross-departmental Action for Cities Unit and has extensive experience of working with volunteers, in local communities (in the UK and overseas), with black, Asian and minority ethnic groups and on national and international development issues. As an Anglican priest, he has served in parochial ministry and industrial mission. He is the author of numerous articles, papers, reports and books. He is an experienced fundraiser and has set up over a dozen charities, companies and social enterprises. Chris is deeply committed to building a just society in practical, sustainable ways. His current main focus is on housing, especially new housing developments.

Christine is an internationally respected applied economist working mainly in the fields of housing economics, finance and policy. She has worked with a wide range of international agencies as well as regularly for the UK government and Parliament. She was Director of the Cambridge Centre for Housing and Planning Research from 1990 to 2010 as well as Professor at LSE.  Major themes in her recent research have included analysis of the relationship between planning and housing; the role of private renting in the UK and in European housing systems; and financing social housing in the UK and Europe. She is special adviser to the Housing, Communities and Local Government Select Committee, a member of the Letwin panel on Build Out Rates and adviser to the House of Commons Work and Pensions Committee on their inquiry into welfare support for housing costs and latterly for Communities and Local Government Select Committee on private renting. She was awarded the OBE for services to housing in 1991.

Cym became Chief Executive of Arawak Walton Housing Association in 1998. Cym is a qualified Chartered Accountant. Cym sits on the Strategic Housing Partnerships in Manchester, Trafford and Stockport. She is currently Chair of BME National which is the umbrella forum for over 35 BME housing associations which aims to promote equality and diversity in the provision of housing and support serves. It works under the banner of the National Housing Federation. She is a member of the advisory group for the North West Housing Forum and the Greater Manchester Providers (Chief Executives) Forum. She has been a member of the Greater Manchester Police Ethics Committee since 2014.

David is a hugely experienced leader in both Executive and Non- Executive roles. He has over 30 years experience in Chief Executive roles, most recently at the National Housing Federation, having previously been Chief Executive of the Scottish Federation of Housing Associations and of Newlon Housing Trust. In his current portfolio of Non-Executive roles, David is Chair of Reall, an international development housing charity, Chair of Clarion HA Board, Chair of ReSI Housing and a board member of Clanmil HA. He is a previous President of Housing Europe. David is also co-Chair of the European Affordable Housing Outlook, a joint Housing Europe and UNECE study. David is widely regarded as a compelling and inspiring public speaker focusing on the challenge of optimistic leadership and the critical importance of great governance. He has huge media experience, is a well-regarded commentator and blogger and has extensive expertise navigating the sometimes opaque world of politics and government. In June 2018 David was awarded a CBE.

Lynne is a Parish vicar and trustee and vice-chair of the National Estate Churches Network (NECN). Prior to ordination, she was a CEO with a professional background in charities, community development and housing, having worked as a local authority housing officer and as company lead on tenant participation and engagement for a social housing provider. Lynne had several years’ engagement in fieldwork for PSSRU - a research unit of the Universities of Kent and Manchester and the London School of Economics - as part of the evaluation of the extra-care housing initiative. She has also worked as a consultant to policy reviews, community planning and cohesion interventions. Born in Ordsall, Salford, Lynne is passionate about issues of poverty, inequality and disadvantage. She writes and speaks on such issues as they affect the Church and wider culture.

Marvin is the elected Mayor of Bristol. Marvin began his career at a UK international Christian aid agency and other voluntary sector roles. His determination to improve opportunities for young people from disadvantaged backgrounds led him to found the City Leadership Programme in 2012, which invests in the personal development and training for future leaders and continues as its director. Marvin has pledged to make Bristol a fairer city for all. His priorities are to tackle Bristol’s housing crisis by building more homes and protecting private housing, improve transport and people flow across the city, ensure early intervention in health and well-being and progress social mobility through access to education and skills. He has developed the ‘City Office’ for Bristol, bringing together the organisations and groups with the largest footprint in the city to better work together and coordinate solutions to the problems facing the city as a whole.

Robert was Permanent Secretary at the Department for Work and Pensions for seven years, until retiring from the civil service in January 2018. Robert was previously Permanent Secretary at the Department for Transport for two and a half years. Earlier in his career, Robert worked in Overseas Development, spent a decade at Her Majesty’s Treasury, spent a two-year secondment with Guinness Brewing Worldwide, returning to the civil service to work in the then Department for Social Security. Robert was knighted in the 2016 New Year’s Honours list for services to transport and welfare and for voluntary services in Kilburn. The latter included local youth work and school governorships. He was, for many years, on the PCC of St Luke’s West Kilburn, and twice served as churchwarden. He was made an Honorary Fellow at St John’s College, Oxford in 2017.

Stephen is the Dean of Theology for the Local Church at the Westminster Theological Centre and the Director and primary teacher of Tent Theology. Previously he was Lecturer in Social and Political Theology at St Mellitus College. He is the author of numerous books and articles on theological politics and church history, including the Compact Guide to Christian History (2011), Kierkegaard's Critique of Christian Nationalism (2011), Kierkegaard: A Single Life (2016),  and the forthcoming Essential Companion to Christian History (2019).

Can I support this?

Yes! Everyone has a part to play in impacting the housing crisis. We absolutely need your voice!